I don’t have much experience of photography at sporting events yet, but I’ve been a skater/surfer and power-kite flyer all my life and I still love extreme sports. So for now this page is mainly focusing on the local skateparks. I’ve been reading up on how to get better action shots; some of my attempts so far are very clear but don’t have any movement or sense of speed as such, I’ve got a lot to learn.

I’ve re-edited a few of the pics from the Parkfield session below, I’m finding better uses for the RAW tools as well as ‘shake reduction’ and other features within Photoshop. The first is the only non 2:3 aspect ratio image I’ve done lately; experimenting with alternative cropping, I think this shot makes more of the subject (skater). 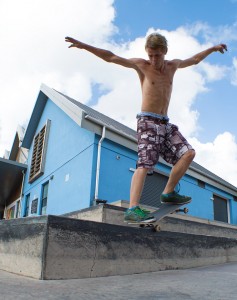 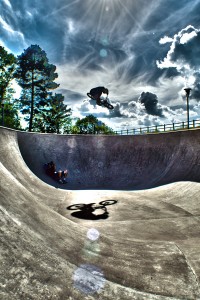 The second image was an experiment in single-shot HDR, the original wasn’t a great quality image so I’ve used some artistic licence to make more of it; particularly the texture of the concrete and the complexity of the clouds stands out in this composition; done with Photoshop’s HDR tools.

After reviewing the shots from a few days ago, and watching a lot of tutorials on skate photography, I went down for another go. This time I wanted to try my cheap wide-angle lens adapter for that classic fish-eye effect, it is a half-measure since I can’t afford a proper wide-angle lens right now; but given the large resolution of my new camera; and no shortage of light, I thought I might get away with it. The conclusion really was that the wide-angle effect adds much more drama and action to the shots; as well as giving me the freedom to hold the camera at arm’s length low to the ground and still get the skater and a wide background all in shot, it’s an almost essential accessory. 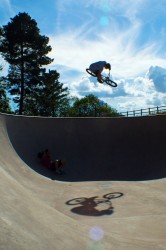 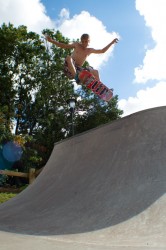 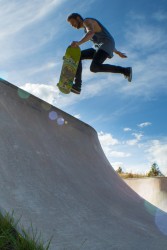 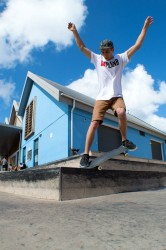 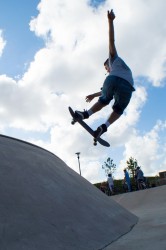 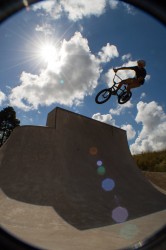 These pictures were taken in two different session up at Parkfield, and as much as I love the airtime the BMXers get; it’s good to get some skateboarding. The problem when shooting into the sun is lighting the dark side of your subject; and I’d like to use the flash except it won’t fire when shooting quicker 250th of a second; this is a real pain but I have some idea’s about how to achieve the same effect in post processing.

The park itself is a great subject for photography with its curves and circular features, it presents many opportunities for leading lines and framing, as well as shooting towards the Sun for the silhouette effect, and quite attractive lens flares. Another time I want some old skool hand plants and powerslides!

Yay, my new camera has arrived! It’s the Nikon D3200 and though it’s not greatly different to my old D50 I still need to get used to it asap, gorgeous weather, so where should I go? The skatepark. As soon as I got there the local lads spotted the camera and rose to the occasion, apparently the best approach is to take a good shot and then show the skaters/riders as an ‘incentive shot’, encouraging them to go bigger, higher, and try their sickest tricks; regardless of the risks! 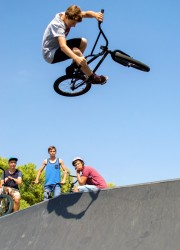 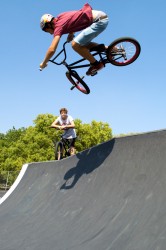 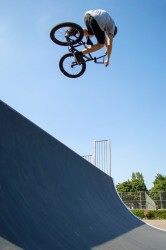 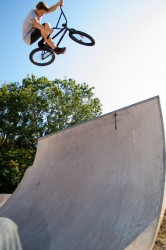 It’s difficult to have hardcore skaters/bmxers flying around the park at the same time as children playing, one of the lads suggested I follow them round to Parkfield, first time I’d been there, and what an awesome facility it is, when I was a kid we could only dream of smooth concrete like that as seen in skate vids from the US.

I really like this shot on the right (above); despite loosing part of his hand at the top of the frame I think this makes it look higher and more dramatic; along with the look on his face! That is easily 10ft off the ground, pretty sick shot really. 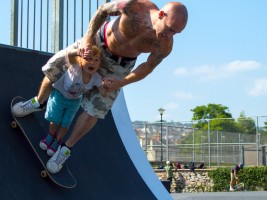 The Viccy Park skatepark was very busy, though mainly with young kids and family type activities, so many scooters these days. It wasn’t my main objective but I spotted a few nice shots, particularly the Father & Son/Daughter riding the mini ramp was great to watch and the kids were loving it.

Paignton is spoilt for skateparks these days, I have not used Parkfield myself yet so all these shots are of the main public skatepark in Victoria park. The park includes a good sized half pipe and quarters transfers etc, and the older part is still there as well including the mini ramp etc.

The Victoria Park skatepark is free and open 24/7 but there is no night lighting. If you are lucky you may be able to park on Hyde Road but be warned that the parking attendants are never far away during peak hours, after 6pm it is fine to park all night. Otherwise the closest place to park is the main Paignton multi-story which you get to via the seafront or Torbay road turn offs. Click here for a map and aerial view of Paignton Skatepark

These images above were the result of a couple of different sessions down at Paignton’s main skatepark just as it was opened for the first time. Rob has come on a long way in the last few years since I have known him and was bustin’ some good moves around the new park. Also Punkus is never far away and he rips on anything; bmx or skateboard or even a scooter! The name Gary Corsico needs little introduction for the old skool Paignton skaters, Gary since childhood was a natural and easily good enough to have been professional, a truly talented skateboarder with his own style. 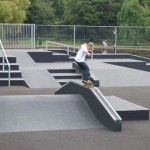 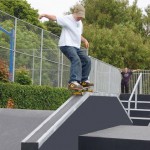 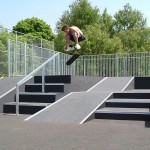 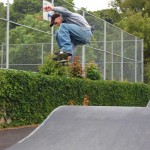 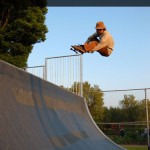 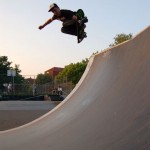 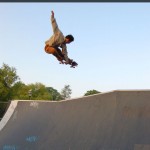 Many a chilled Summers’ evening is spent down at Broadsands and Elberry beaches, a pleasant walk from my house, under the little railway bridge, through the fields to Broadsands, then over the headland by the golf course and down to Elberry cove before returning the same way. Along the journey are many photo opportunities on any given day, there are often speedboats and jet ski’s which make good targets, but if they are present then the chances of seeing a seal are greatly reduced I think. 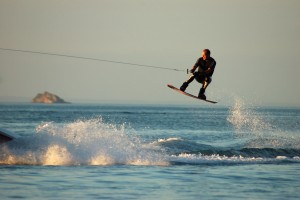 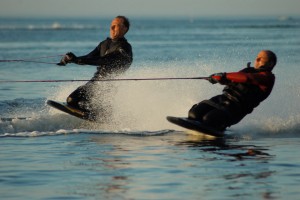 The guy on the left was pretty good, trying much more complex tricks than that though I didn’t manage to catch any, notice Thatchers Rock well positioned in the background. The shot on the right I think captures the moment well; that split second of adrenaline now frozen in time. 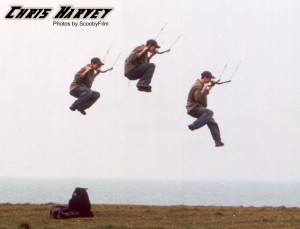 OK, this is not my photography as such, except that I combined three images into one – really I’m just showing off! It’s easily my finest sporting moment, captured by my mate Steve back in 2002. We got well into our kites back then, but this session was a special one, the wind was onshore and so smooth and consistent as to give me complete confidence in getting higher and higher each time.

The kite was Steve’s 4 meter Flexifoil Blade II which is a seriously good kite with a safe and trustworthy power output. This was my best kite air session ever and I’ll always remember being so ‘high’ from the adrenaline. Three different jumps which I combined into one accurate looking sequence.