The leading edge of a storm heading up the Dart Valley, a heavy rain shower had soaked the ground as you can see but I managed to snatch a few shots without getting too wet. This is a 4 picture photo-merge to get the wide-angle condensed into a normal sort-of image. 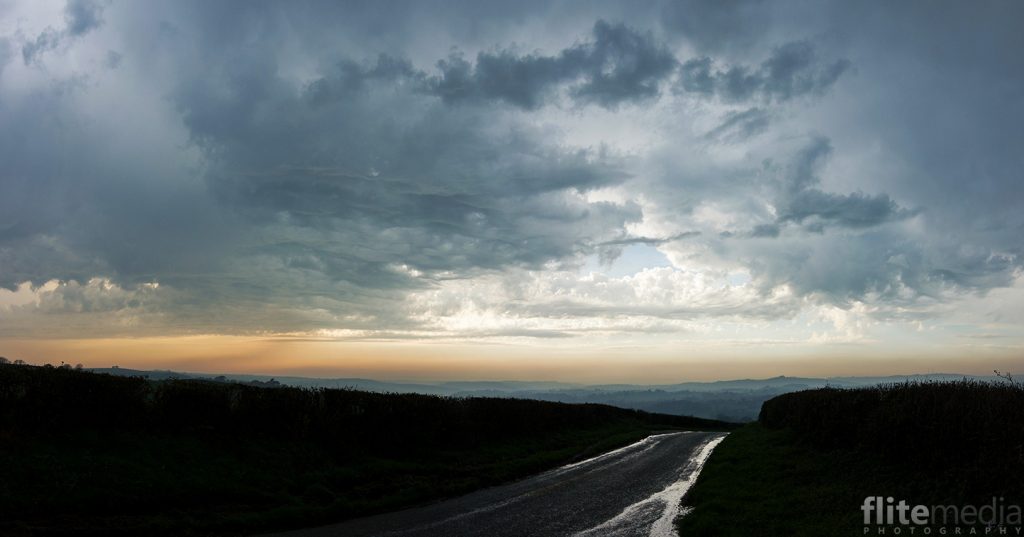 Last summer we had an epic lighting storm flashing at a crazy pace which went up the Tamar Valley over Plymouth – I’m cautiously hoping we get more like that this year as it gives a real opportunity for lighting photography; though it also scares the crap out of me so gonna have to be brave!

The last time I had the opportunity to try photographing lightning was 5 years ago and that was about 5am and hammering it down with rain, those results were not great. This time however I seemed to get lucky with the rain, shooting a storm which was some distance away; these strikes look like they were touching down 5 or 10 miles away, most of the time I wasn’t even hearing the thunder. 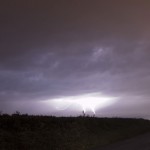 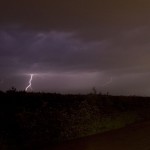 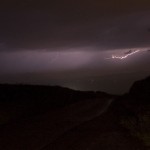 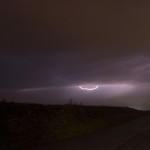 The first challenge was focussing without anything to focus on, with star trails at least you can zoom in to a bright star and focus on that; but with this location I had no illuminated objects in the view at all so had to guess the focus point! Could have been worse… Then with almost no experience at all I had to guess settings, I went for F10 as a medium, and had the ISO at 1600 just to ensure something showed up, under the circumstances I think some beginners luck helped, hopefully I will get another go sometime this millennium!

I’ve been watching the revised Alex Filippenko series of lectures for TTC on Understanding the Universe and he explains the creation of rainbows very well, he also went into supernumerary bows which I hadn’t heard of before. Just the next day a passing shower allowed me to hastily photograph the phenomena! 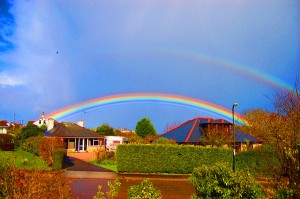 The basic idea is that light passing through a rain drop will bounce off the inside walls of the drop and exit at specific angles; the light bends differently along its wavelength so splitting the white light into its colour’s like a prism does. The supernumerary bows are the blue/green stripes at the bottom of the rainbow that don’t fit into the expected pattern of the spectrum. These are patterns of interference attributed to the wave nature of light, in-phase and out-phase creating amplification and cancellation, but this is not fully explained in science at all. I think it fits into the quantum wave-particle duality business somewhere?! More info on this optical mystery can be found here.

This image was taken in March 2008, I saw the rain followed by the sunshine and predicted there may be a rainbow and sure enough there was possibly the brightest rainbow I’ve ever seen. This picture has been over saturated with Photoshop to really show how complex the colouring is and clearly show the four cyan coloured bands; or four supernumerary bows. 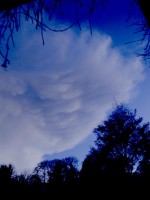 Left: I just happened to look up from my back garden one day and there it was; no storm as such and certainly no super-cells! Just a well defined shape under the leading edge of a cloud, I have done a fair bit of photoshop tweaking to make it stand out more. It appears to be a week example of udderous or mammatus cloud; though nothing like as impressive as other images.

Right: Another flooky moment, this cloud had the appearance of a skull with the eye but Photoshop really brings out the likeness. I doubt its an omen of any kind so I wouldn’t go preparing for the end of the world or anything!