Spring is in the air and everything is looking green and lush, including the new woodwork outside my window; stained green which blends in very well with the woodland behind. This photo opportunity was too much to resist; a sleepy pigeon dosing before bedtime looking very comfortable in its sleeping bag, but particularly I thought the background had potential for good framing and a pleasant image. 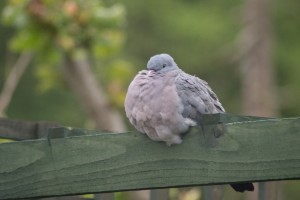 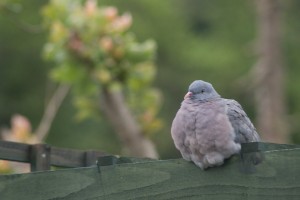 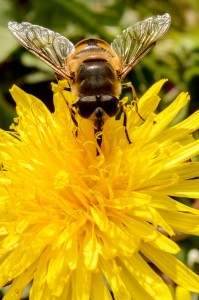 I was getting some pretty boring pics of this dandelion, until the bee turned up. Somehow I got lucky as most of the pics showed motion blur from the bee’s fast moving/vibrating wings etc, but this one shot caught a moment of stillness, I would still like a little more depth of field though. I think with the flower being essentially all the same colour that wasn’t making a very good subject on its own.

It was a sharp picture to begin with, but I’m really liking Photoshop’s ‘Shake Reduction’ filter, I’m only using default settings at the moment but it makes a massive difference to these type of shots; particularly for flowers. The structure of the bee’s wings really benefit from that filter in this picture. 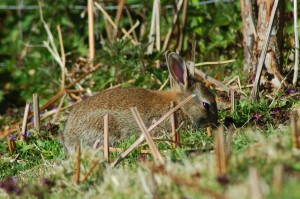 One of my favourite spots down by the River Dart I have dubbed ‘buttercup field’, it is also covered in lavender or some other fragranced purple flowers, these along with the rich surrounding hedges must create an ideal home for rabbits. I’ve probably counted 20 at a time when we sit still and allow them to gain enough confidence to bring their families out to feed. I was slowly creeping up on this one without the tripod but could probably get closer if I tried again perhaps using the monopod.

Just round from that field is Galmpton Creek which always has some wildlife spectacle going on, often the swans are hanging out cleaning themselves and just chilling in the sunshine as in this second image. I’ll be having more attempts to better images like these over the coming summer. 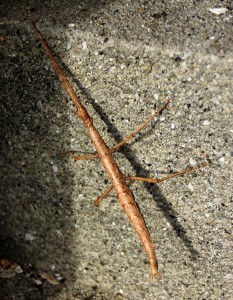 This isn’t a very good photo but I wanted to get evidence of this very unexpected visitor. If somebody had have asked me I would have guessed stick insects didn’t live in the British Isles; but I would have been wrong. I’ve seen stick insects that people have bought from pet shops! This one was spotted under the bright outdoor lights at my friends place; it’s amazing camo doesn’t do it much good against gray concrete! It worked it’s way up the side of the house two stories up overnight and then was found back down on the steps where it started the following morning, this living twiglet was apparently attracting interest from some garden birds but it hasn’t sustained any damage yet.

According to the ERCCIS website there is a population of stick insects living in Cornwall though they also say the green prickly stick insect has been found up here in South Devon before. I’ll report this finding to them and also BBC Autumn Watch just as it isn’t every day you see one, they may not be that rare as they are well camouflaged but it’s certainly the first time I’ve seen one in the wild. This picture was taken on the 10th of November 2007 in Galmpton, South Devon.

UPDATE: Since posting this on here I’ve had several emails from residents of the West Country saying they too have seen stick insects in their garden:

15th May 2014 – “Found a tiny (baby) stick insect in my kitchen today, it’s moved about a bit but has now stayed in the same place for over 3-4 hours.” Julie, Lostwithiel

28th Nov 2013 – “Yesterday morning I saw a brown stick insect (like the one in the right) on my garage door. It was about 4 inches long with 2 inch antenna.” Debbie, Wadebridge

7th January 2013 – “Brown stick insect attempted to come through my open kitchen window this evening. All I could see at first were the large legs and I thought it was a huge spider!! Removed it to a safe place.” Lynda, Penzance

11th August 2012 – “We have loads of green stick insects living in our conifers, every year we see more of them counted around 20 this morning,they seem to be shredding there skins at the moment.” Julie, Paignton

31st Dec 2010 – “Brown stick insect found outside in our recycling box, minus one leg!” Beth, Camborne

17th June 2009 – “We have a family of green stick insects spotted for the first time tonight in our garden in Plymouth, we’ve counted 5 so far, very surprised!” Suzanne, Plymouth

14th April 2009 – “I have loads of baby stick insects in my garden now, they seem to be mostly on a rose bush.”Alison, Hillrise, Galmpton

25th September 2008 – “Green stick insect found in the same garden as the brown one in the picture to the right, this new green one is the picture on the left.” Steve, Galmpton

9th February 2008 – “My neighbour photographed a green prickly stick insect measuring about 5 inches long in my garden in Galmpton on the 16th December 2007 when I was away on holiday, and I saw it myself (or another one!) on my window a month later. I’ve seen several stick insects in my garden over the past 5 years, different sizes from 1 to 6 inches long and either bright green or straw coloured.” Jill, Galmpton

19th January 2008 – “Hi, we read with interest about your findings of the brown stick insect, today we took a picture on my phone of a green one about 4 inches long on the outside wall of my bungalow… we did not realise they lived outside and we are not sure if it is a prickly one, thanks” Chris, Galmpton

If you have seen a wild stick insect in the area let me know and I’ll post the info on here (Even better send a picture! I may have to make a dedicated page for this!) 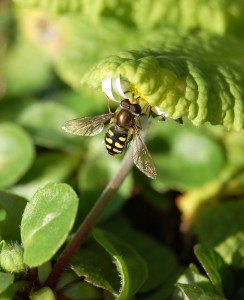 What more excuse do I need to be outdoors with the camera than a gorgeous sunny spring day. This shot was nothing serious at all; I’d just popped down to Steve’s for a coffee and sat in the garden for a while. All the spring flowers are out and summer feels like it is well on its way now.

From what I have read on the web; this is a syrphid fly. Common to our lands but not the kind of thing people take any notice of. I wasn’t doing any serious photography so didn’t use a tripod, in the bright sunlight you can always shoot at very high shutter speeds anyway.

Butterflies are one of the most colourful of our common sights in the garden and an obvious target for photography. I have found it difficult to get them so far as they don’t sit still for long, especially when there’s a wind. This first shot was a bit of a flook really because until I saw this picture on the computer I thought there was only one butterfly in the shot! I’ve looked them up and they seem to be Meadow Browns which would make sense as they were spotted on the grassy meadow beside Broadsands beach. 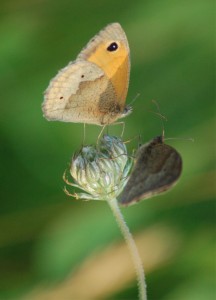 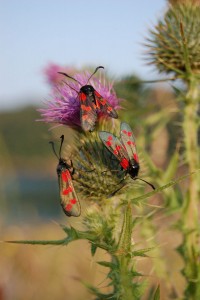 A short distance away on the same evening I found these three 6-spot Burnet moths hanging out together, they seemed to be very happy there and hardly moved while they had their picture taken. They are what is known as day-flying moths and look half way between a butterfly and a black beetle type insect. Behind the subject you can see the blurred vision of the woodland and cliffs leading down to the sea near Elberry cove.

The pond in my back garden has constant activity and is an excellent breeding ground for many species of pond-life. In the summer we have a lot of damselflies and also the less common and larger dragonflies passing through, some of the dragonflies have the wingspan of small birds but I’m finding them a bit tricky to get pictures of as they never seem to sit still for long! The quantity of damselflies make them pretty easy to get near as they tend to frequent the same plants and leaves. Also I find them very trusting while I’m slowly edging closer to fill the frame, often to the max of my 18-55 lens so I am considering getting a macro lens to get that bit closer again. 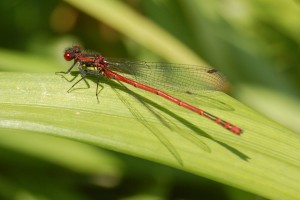 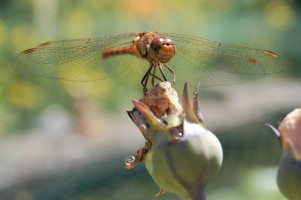 More colourful shots; bees gathering pollen on a summer’s day down at Broadsands beach. I found the bee’s to be ‘busy’ and not aggressive at all, therefore quite easy to get up close to. The hardest thing is timing the shot for the best moment, bee’s don’t stay still for long so its hard to get the pose right. These were taken in bright sunlight but still only at 400th and 640th of a second exposure respectively. 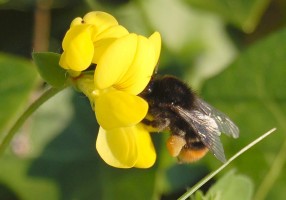 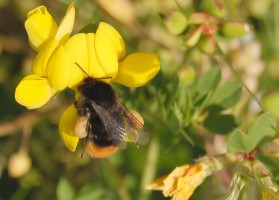 I guess not many people can say they have been inches from badgers in the wild, and our back garden does count as the wild, just! We have a family of badgers living very nearby so our garden is in their territory and we get patrols coming through almost every night. A few years ago I got about half an hour of close up video footage of them eating peanut butter off a stick my Mum was holding. Badgers have very poor eyesight and they think with their stomachs so they are relatively easy to get on film or take photos of. I guess they don’t have any predators really so they can afford to be a little complacent, except where humans are concerned off course. I have been stood outside and had a badger walk through the garden and around my feet with no knowledge that I was there at all! 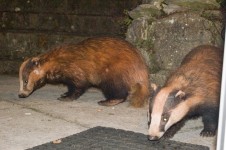 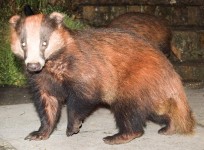 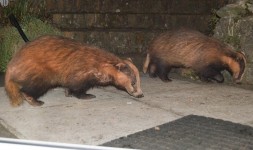 These shots are not what I would call good at all but still they do show the subject and look ok in web sizes. I started without the flash but it’s impossible to take well focused clear shots of them without a tripod in which case I wouldn’t have the flexibly of movement. These shots are taken from within 6ft of the badgers all around a 30th of a second to try and get the clarity but still having some lighting. The badgers were aware of the camera noises and the flash but I’m sure they just consider food to be the higher priority and continue searching for peanuts! The flash creates that red eye effect but after trying to remove it I decided that it looked unnatural considering the shots are obviously flash lit and opted to leave the red eye there, at least for now. 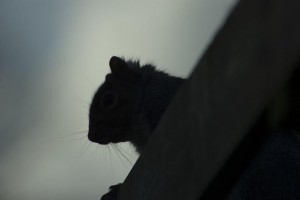 This Squirrel wished to remain anonymous

An easy target for me; almost every day I see the local gray squirrels coming to the bird feeders on the trellis work outside my window. Peanuts seem to be a favourite food, either for consumption immediately or for taking away and stashing somewhere in the garden.

UPDATE 2015: We used to get squirrels in the garden all the time but not now; I see them in the woods 100 meters away but they are rarely seen in the gardens these days, not sure why that is. 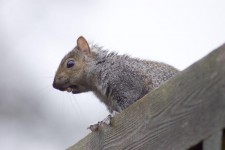 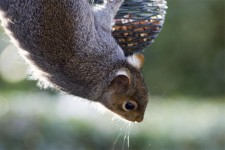