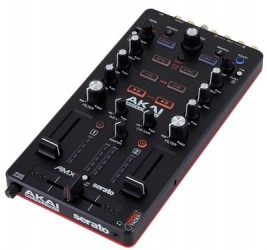 So, I accepted my first DJ gig – can’t be that hard can it?! With Ableton it really isn’t actually, I collected tunes over a few months; learned how to set the cue point and BPM, put them in BPM order from 136 to 140, tested the transitions and re-ordered the tunes if one didn’t sound right, so created a pre-planned setlist in session view to cover an hour and a half, ready to go…

Almost, with a few days to go I was considering different equipment to get me through – with a preplanned set in Live I almost could have got away with a laptop alone; and no headphone monitoring, but the thing which was missing was level siders for each deck and most-importantly the ability to do bass-cuts while two tunes are running together, I could have done this with my existing soundcard and my keyboard; but I knew it could be far more efficient so I started looking for solutions.

There weren’t any obvious tools for the job really, you need a control surface and an ASIO soundcard, and there aren’t many all in one box. Most of the DJ controllers have unnecessary rotary plater things which consume a lot of space, and very few have an integrated soundcard giving you the 4 outputs required for mixer output and headphone cue. But I spotted one which appeared to have the right stuff; though nowhere did it actually confirm it was suitable for Ableton, and there wasn’t much info online – the Akai AMX.

So I took a pretty big gamble and purchased the AMX with 24 hours to go, also taking the opportunity to get a new pair of Sennheiser headphones as my others are pretty old now and have lost all the padding. The AMX appeared to be a 4 channel soundcard and control surface mappable to Ableton; but I really couldn’t confirm this anywhere, the AMX is designed and marketed for Serato DJ – so it was a fairly large but calculated risk!

The big day arrived, and with a few hours to go I unpacked the new gear, downloaded and installed the drivers for the AMX, and fired up Ableton to see if it worked, or didn’t. Magically the soundcard appeared as 4 channels as hoped, and after assigning the AMX as a control surface the inputs were mappable within Ableton – TFFT!! I dropped the buffer-size to 128 using the simple AMX driver panel giving me 7ms of latency. Two minutes later it was all set up and I was doing a practice run through my set.

I thought EQ3 would have been the ideal tool for DJ’ing but as soon as you put it in line there is some volume added to the signal and a noticeable change in the sound – not good. So I set up EQ8 for a sweepable non-resonant high-pass filter, conveniently half way at the midway notch on the AMX filter knob – perfect. The only other thing I use is a basic limiter on each channel and on the master. I don’t see the point in using the crossfader as the two sliders give much more control over transitions; so the cross-fader isn’t being used (the crossfader is really loose too; presumably for scratch type DJ’ing).

Time to see if it works in practice!

Everything easily fits in a standard rucksack – my laptop with neoprene cover, power lead, Akai AMX loosely protected with its foam wallet, USB lead, stereo phono lead, headphones .. thats it. I needed one power socket, and a stereo phono input to the stage mixer – nothing else. The AMX is bus powered, the headphones plug into the front, mixer output on the back.

There really isn’t much more to say that that, other than the volume of the monitors and sound system make it really hard to hear what you are doing on stage so I was very glad I bought the new headphones and how good they are at isolating you from the confusion outside, good job I got those.

Pro’s – All-in-one super-simple bus-powered controller/soundcard solution. Solid construction. All knobs, sliders, and buttons, mappable by your own design in Live.

Con’s – The LED light meters can’t work without Serato, the AMX is not a standard mixer. The headphone cue buttons have the same toggle problem my MPK has – the backlights on those buttons only change once for every two pushes; which means they are out of sync – any ideas?

Notes after several years of use (Jan 2018): Having done about 20 live sets like this I can definitely say I love the AMX as a controller/soundcard and it all works really well. The only reliability issue I’ve had is that the square end of a USB lead really isn’t a very tight fit, and I have to be careful that this doesn’t get knocked or connectivity can be lost. I’m not blaming the AMX for this, I think it’s much the same with all USB leads, not a very professional plug-socket system imo.

This is one of my most recent live sets still using exactly the same setup: